“Enough is Enough. Where are the Parents?” Ask Senior Officers 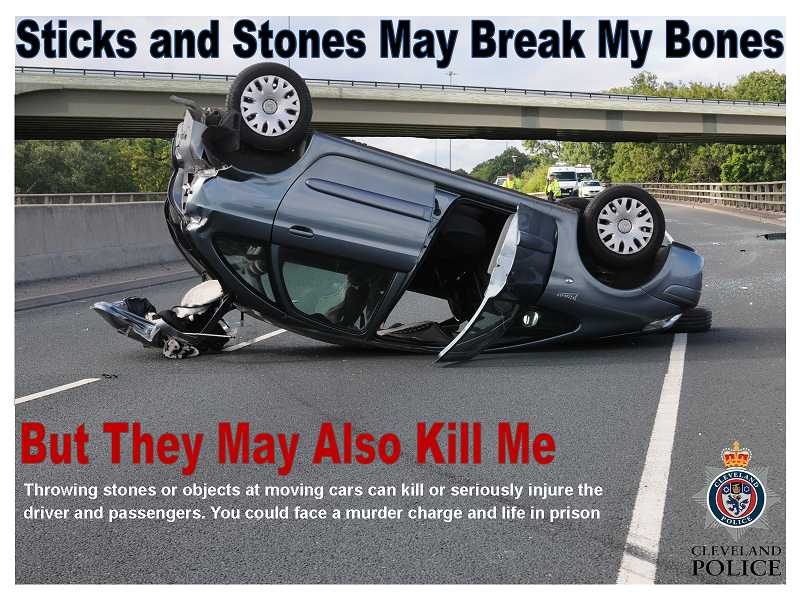 Senior officers at Cleveland Police say “enough is enough” and are calling on parents to educate their children about the dangers of throwing objects at moving vehicles.

The force has produced an online poster titled “Sticks and stones may break my bones but they may also kill me”, which will be shared online and in local schools in the area to highlight the serious dangers of throwing objects at vehicles.

Police want all parents to be aware of the consequences of throwing objects at cars after the reports suggest the culprits are young people living in the local area. Between Wednesday 23rd September and Saturday 3rd October there were twelve incidents reported, including on the A19 at Middlesbrough.

Chief Superintendent Glenn Gudgeon said: “There is only so much that we can do to prevent these incidents from happening and it is clear that these youths do not understand the extremely dangerous consequences of throwing objects at moving vehicles. I want people to think how they would feel if someone they love was hit in the face by a brick travelling at a combined speed of 60mph, if it didn’t kill them they would be living with life changing injuries. The parents of the children involved need to play their part and educate their children on the serious dangers of throwing stones and various other objects at vehicles. They need to know that it is not acceptable to behave this way and that they could end up killing someone as a result of a moment of stupidity.

“These incidents are happening too frequently and the behaviour of these youths is completely irresponsible. Putting people’s lives at risk is not a laughing matter, and these youths should not be encouraging each other to participate in this shocking behaviour.

With faster roads through the Zetland FM area including the A174 Parkway, anyone with information regarding the youths or anyone who witnessed the incidents is asked to contact Cleveland Police on the non-emergency 101 number, Crimestoppers anonymously on 0800 555 111 or www.crimestoppers-uk.org.