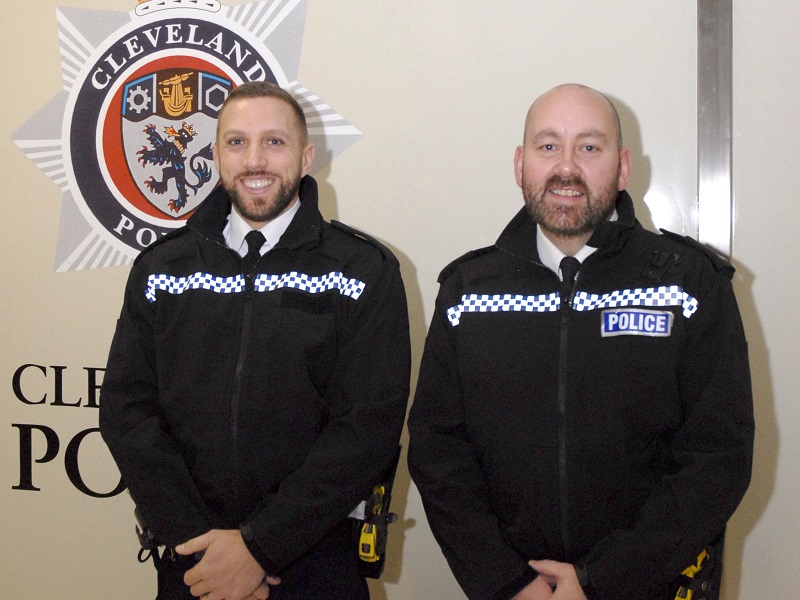 Two Cleveland Police officers have been nominated for a Police Bravery Award after saving the life of a woman who almost drowned at Redcar.

PC Stewart Shepherd, 44 and PC Haris Imaan, 32 were nominated following an incident which they attended on Wednesday 19th November 2014 when they were called to reports of a distressed woman in the sea at Redcar seafront.

The woman had very quickly got out of her depth and was around 15 metres from shore, moments away from going under. The officers had little time to decide what action to take.

The quick-thinking officers saw that the woman’s friends were also trying to go into the water to help her, putting themselves and others at further risk. They controlled the crowd and kept the woman in sight whilst awaiting the lifeboat and coastguard.

The woman was now too far out to throw a rope or wade out, so the officers took a lifebuoy and began their rescue. PC Shepherd removed his body armour and began to move out into the sea, while PC Imaan held the rescue rope and maintained a safety line to shore.

PC Shepherd swam towards the woman, who had moved further away. PC Shepherd swam further with PC Imaan moving waist deep into the water to provide the vital extra rope that would bring his colleague and the woman back in.

The officers finally reached the woman and brought her back to dry land and safety.

Deputy Secretary for Cleveland Police Federation, Richie Murray said: “The brave officers believed their duty to the public and the immediate risk to the woman outweighed any personal danger to themselves. They took into consideration the fast-moving sea and the time it would take for a person to drown, aswell as their own training and skill. Their decision undoubtedly saved the woman’s life.”

Also speaking on the incident, Deputy Chief Constable, Ian Spittal said: “Both officers demonstrated all that is special about the role of constable and the true commitment all our officers give to protecting the community from harm. It is clear to me that without their immediate actions the outcome could have been tragic.”

The Police Bravery Awards is hosted in partnership with Police Mutual and is an annual event which honours police officers across England and Wales.

This year marks the 20th Police Bravery Awards and will take place at The Dorchester Hotel in London on Tuesday 27th October 2015.

Speaking of the event, CEO of Police Mutual, Stephen Mann said: “Police Mutual is extremely proud to sponsor the Police Bravery Awards, recognising the courage of police officers who face extremely challenging situations every day to keep the public safe. Our ongoing, long-term commitment to support these awards reflects the incredible respect we have for the work of the police service.”